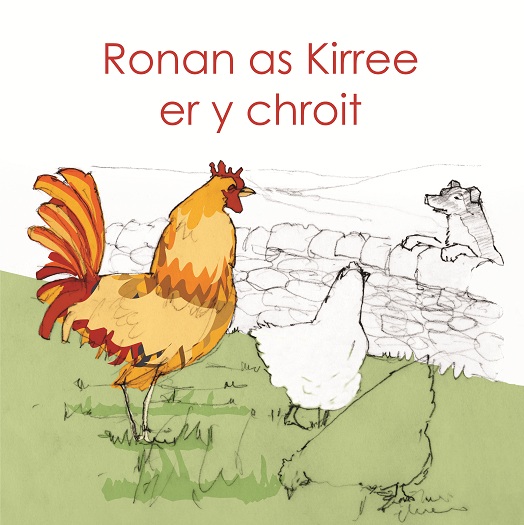 This is our first Manx children's book. Ronan and Kirree visit their grandmother on the croft and the dog promptly zooms off to tell all the animals the news. While he's doing that, we also find out what all the animals say in Gaelic - from the brown Highland cow and her calf, the duck and her ducklings, the geese, the cockerel and the hens, the horse and donkey to the bees and the cat and all the other animals on the croft - even the whale. Yes, the whale says something in Manx and if you didn't know that, here's your chance to find out. 40 pages with 19 colourful and appealing illustrations.

The story was written in Scottish Gaelic to begin with and is not a translation of an existing English book. As it's also firmly set on the shores of the Western Ocean some place, it's not only a children's book in Gaelic - it has a heart that is Gaelach too. The horse is on the machair and there's a distinct lack of trees, dogs called "Spot" or ducks called "Jemima"!

There's also a recording of the story being told (see below) and a small dictionary of the story for parents who aren't quite fluent yet.

Listen to the audio (mp3)
Dictionary